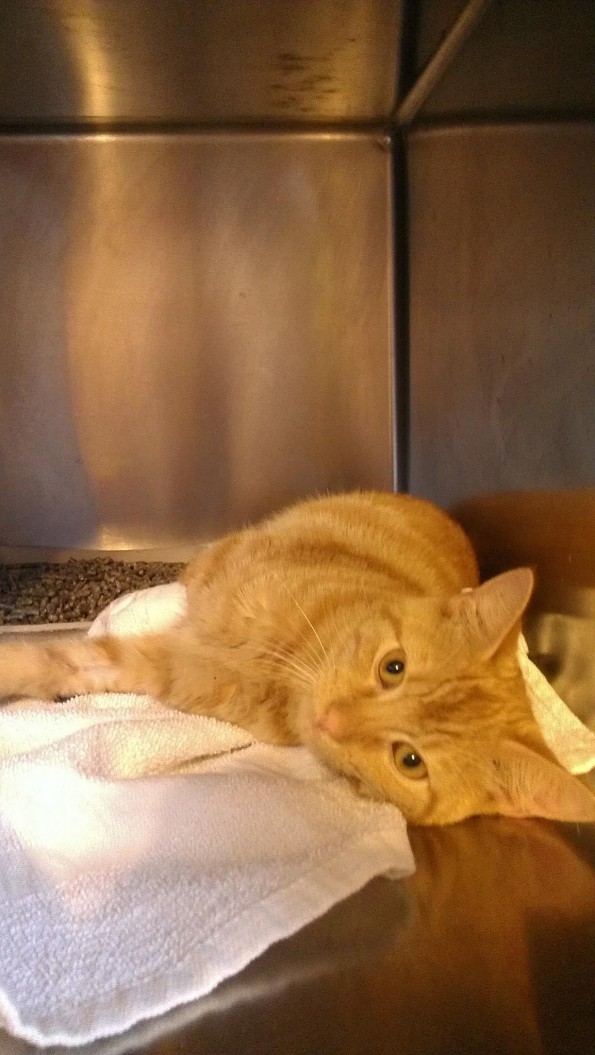 I have never been terribly good at letting others help me. I tend to be a lone soldier, fighting the hoards as a solitary Xena with minimal armour, a single weapon and amazing luck. And while such an image is slightly romantic, the reality can be lonely and frightening. Several days ago, a battered orange male kitten was dropped off in a box. His right front leg was mangled. Swelling, cellulits, deep sloughing wounds and severe sepsis crippled the little creature. I was prepared for a hissing, nasty, painful kitty and handled him carefully during his initial intravenous catheter placement, medication administration and wound treatment. His first night, he let us do his treatments with minimal struggling and I attributed it to shock and hyperthermia (his temp was over 106 degrees F). I knew I would have been a terrible patient in his place. Anyone daring to touch MY wounds would have been slashed and bitten the moment they reached for my throbbing leg!

By morning, his temperature was normal and I needed to change his bandages. Once again, he tolerated my minstrations, his calm eyes watching my face. I paused, staring back at him, and felt his tiny chin rub against my gloved hand. I was confused. Did he not understand that I was causing him pain? Did he not feel the tearing of his skin as I removed dead tissue? I felt him tug his paw from my hand but he didn’t try to jump from the table. He pushed his face against my hand once again, and this time I felt his body rumble with a deep purr.

I don’t understand this willingness of one creature to trust another, especially a stranger, a member of a different species. I can’t comprehend the ability to surrender to someone else’s minstrations with ultimate trust. I intellectually know I am a veterinarian and it is my duty to heal, but I don’t understand the miracle of an animal’s willingness to be healed.

It doesn’t always work like that. I recall a white dog that had been attacked by a pack of roaming mongrels in Waterbury, CT. The dog’s jugular vein had been torn and he was losing blood fast. His wounds were horrific. I tried to treat that little white dog. I tried to wrap his neck, clamp the vein, do anything… but he struggled against me with a viciousness that ultimately killed him. I had to watch him die from two feet away as he lunged at me, snarling with bared, snapping teeth before finally collapsing from lack of blood to his brain. His response which was so primitive and protective made sense to me . A wounded white dog in the midst of incomprehensible surroundings, struggling to protect himself from any new threats.

The orange cat’s acceptance and surrender did not make sense to me. It was a different way of perceiving the complex universe. He had a view of the world that allowed him to trust others, despite the fact that he had already been brutally hurt by someone or something else before.

I fell off my horse the other day. He spooked at a silly ray of sunshine and I hit the ground with a heavy thump. Of course I immediately got to my feet and assured everyone I was fine. I didn’t need any help.

But when I got home I looked at my new husband. He was in the office playing Battle Pirates on the computer. Behind him was the orange kitten, now named Sherbet, relaxing in his cage. I walked up behind my husband and placed my hands on his shoulders. Then I asked him to come sit on the couch with me and massage my sore muscles. I asked for help.

And it felt wonderful.